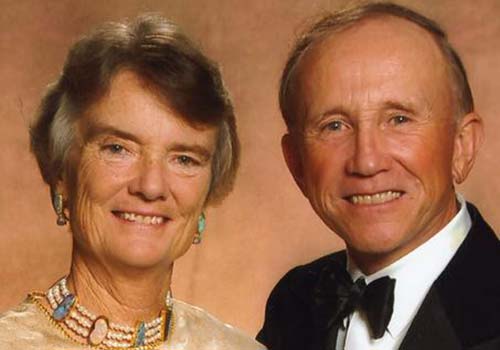 “Bringing the Corbett name to the forefront highlights role models that represent leadership, vision, generosity, and wisdom. We are filled with profound gratitude and admiration for the Corbett family.”

From IDS to Corbett Prep

To honor the civic leadership, vision and generosity of Tampa philanthropists Cornelia and Dick Corbett and their family, the Board of Trustees of Independent Day School (IDS) renamed the school Corbett Preparatory School of IDS. The change took effect in the 2012-13 school year.

“The decision to rename our school Corbett Preparatory School of IDS represents our profound appreciation for Cornelia and Dick Corbett and their family’s ardent support for IDS over the past 32 years,” Corbett Prep Head of School Dr. Joyce Burick Swarzman said when the decision was announced. The Corbett family’s longstanding commitment to IDS began when their four children attended the school, and Mrs. Corbett served as President of its Board of Trustees for two separate times for a total of 14 years.

The decision to rename the school Corbett Prep highlights the Corbett family’s monumental civic and philanthropic leadership in Tampa Bay.

A commitment to community

Guided by a belief in “making a difference for children,” Mrs. Corbett and the entire Corbett family have left an indelible mark on Tampa Bay. Among other philanthropic accomplishments, Mrs. Corbett is a tireless leader of the Tampa Museum of Art that features the spectacular 66,000-square-foot Cornelia Corbett Center. Mrs. Corbett also avidly supports Tampa’s Champions for Children, an organization that builds stronger families through child abuse prevention and family education programs. Mrs. Corbett and The William Stamps Farish Fund have established the Corbett Jewish Community Center (JCC) Preschool Scholarship Fund to enable more children to attend the center’s programs. Additionally, the Corbetts are the visionaries and lead donors behind the University of South Florida Corbett Stadium, one of our country’s premier collegiate soccer facilities.

“To have IDS renamed Corbett Prep is a tremendous honor, and I am truly humbled,” said Mrs. Corbett. “Corbett Prep is a private school with a public purpose, a rare combination that ensures an excellent education for the whole child – academically, socially, athletically, creatively, and so much more. I cannot think of a greater privilege than to be the namesake of a school and community I have admired so deeply, for so long.”

Back to About Corbett Prep